2020 is a year of change and the 8th edition of Romanian Design Week explores this theme, so we were curious to find out how professionals from the creative industries interpret the idea of change today.

Their opinions can be found in the Possible Realities exhibition, part of @CHANGE, which takes place at Combinatul Fondului Plastic between 11th-20th of September.

In the past 10 years ecoLogicStudio, founded by Claudia Pasquero and Marco Poletto, has designed and built several living installations and architectures, demonstrating how microorganisms such as algae can become part of the bio-city of the future. 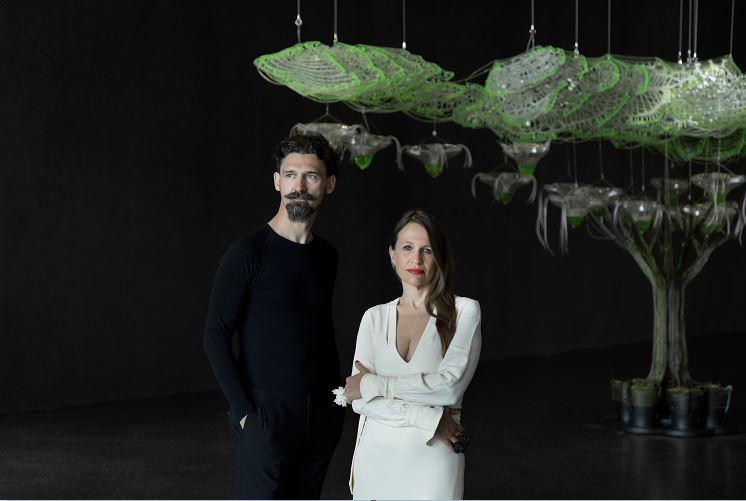 Claudia Pasquero is an architect, curator, author and educator; her work and research operates at the intersection of biology, computation and design. She is founder and co-director of ecoLogicStudio in London, Lecturer and director of the Urban Morphogenesis Lab at the Bartlett UCL, Professor of Landscape Architecture and founder of the Synthetic Landscape Lab at Innsbruck University.

Claudia has been Head Curator of the Tallinn Architectural Biennale 2017, and she has been nominated in the WIRED smart list in the same year.

She is co-author of "Systemic Architecture - Operating manual for the self-organizing city" published by Routledge in 2012.

Her work has been published and exhibited internationally: at the FRAC Centre in Orléans, the Venice Architectural Biennale, ZKM Karlsruhe and the MilanoExpo2015 among others. ecoLogicStudio has in recent year completed a series of photosynthetic architectures, such as, the BioTechHut Pavilion for Expo Astana 2017, HORTUS Astana 2017, Urban Algae Folly Aarhus 2017, PhotoSynthEtica Dublin 2019, HORTUS XL 2020 for the Center Pompidou in Paris, PhotosSynthEtica Helsinki 2020 upon others.

Marco Poletto is an architect, educator and innovator based in London. He is co-founder and Director of the architectural practice ecoLogicStudio and the design innovation venture Photo Synthetica, focussed on developing architectural solutions to fight Climate Change.

Marco holds a PhD Degree from RMIT University, Melbourne. His thesis on the “Urbansphere” argues that the increased spatial integration of non-human systems within architecture is crucial to evolve higher forms of urban ecological intelligence. He is also co-author of “Systemic Architecture” a book published by Routledge in 2012.

Marco has been Unit Master at the Architectural Association in London, Visiting critic at Cornell University and Research Cluster leader at The Bartlett, UCL.

He currently Lectures at the University of Innsbruck and the IAAC in Barcelona. Marco's work has been exhibited internationally, more recently in Paris (Centre Pompidou, 2019), Tokyo (Mori Gallery, 2019), Vienna (MAK, 2019), Karlsruhe (ZKM, 2019) and Astana (EXPO 2017).

1. How do you think the pandemic will change the world: the way we live or interact with others, with the cities we live in and with spaces in general?

I don't believe radical social and cultural transformations occur as a consequence of singular events, although sometimes events acts as triggers of change. Today change is necessary, especially in the way we plan cities. We need to be able to plan the co-existence of forms of human and non-human inhabitation as well as forms of non-human life such as viruses and bacteria. A big part of what we try to promote is a deeper understanding of how we could co-design the planet with these forms of non-human life. The pandemic has certainly underlined this issue. So far, I must say, the architectural response has been quite conservative, focussing mainly on ways of shielding us from the virus by forcing a physical separation of people and activities.

In the long term the pandemic will force us to engage with a systemic approach to planning in a much more sophisticated way. The transmissibility and virulence of a virus are its two defining qualities. Both can be affected and managed through design but this can only be done through a systemic approach.

Digital technologies are critical to achieve this goal and in that sense they will become a more important and useful tool for any designer and planner. For instance the availability of big data about people’s movements and behaviour. So far, the data are mostly owned by private companies or corporations that use them for marketing purposes, but these datasets can be retooled for the purpose of urban health design. Partially it’s the task of designers to come up with ideas on how this could be done and push governments, at both local and national levels, to intervene through innovation grants and the promotion of pilot projects.

2. How will the pandemic change the role of design in the future?

As a designer, you need to think about the implications of the product you design at different scales and in different domains. More and more designers should look at the ability of products and devices to not simply fulfil some niche in the market or some immediate need, but really to act as global disruptors, or as agents of change and transformation in relationship to these bigger processes that are potentially global in scale.

Now, more than ever, the role of design is to look at much bigger processes that can be affected in a direct way; think for instance about food supply chains or pollution emissions or waste disposal. We shall ask ourselves, how can my design disrupt patterns of production and consumption by affecting users’ behaviour or by enabling the emergence of new process of production within the urban realm? If you look at it from a systemic point of view, even something quite small and simple, when it’s repeated several times and it goes “viral”, itcan create larger networks and develop impact that is several times bigger than its size or the combined impacts of the individual units.

3. Is creativity an essential tool for adapting and/or for change? And is the current trajectory of design leading us to a better world, in your opinion?

We believe that design and the visual meta-language can have a role in helping us better understand the patterns and processes of the complex world that surrounds us. In fact, many of the microorganisms that surround us express their intelligence through patterns that are recognizable visually, through a visual meat-language. Design, also being a visual language, could have a role in reconnecting us to these process.

Science is always quoted as the discipline to refer to in the case of an emergency like this pandemic. Science of course is probably our best tool to understand the mechanisms of nature, the way it works and how we can deal with it. However, at the same time, there is a fundamental role of design and other visual arts to operate together with science as tools of knowledge and discovery.

And now in the Anthropocene age, more than ever before, there is an urgent necessity to evolve our definition of nature, our understanding of the concept of nature. Nature today is more and more contaminated, not just physically, but also conceptually, it is enmeshed with artificiality and the effects of complex artificial systems. So we urgently need to evolve our understanding and our definition of nature itself. And this cannot be achieved purely through the lenses of science because of the multiple implications on  our culture and our philosophy.

And that's where design has a very important role to play, to open up new interpretations of the world that surrounds us. Through design we can test and learn of to effectively inhabit our world in a way that supports the coexistence between human and non-human systems.

4. How was the design world affected by the pandemic and how can it become more relevant and more resilient?

There has been an immediate impact on many businesses especially within the arts and the creative world.But again, we must be positive in our outlook towards the possibilities of the future. The one good thing that can emerge out of this crisis is that it is going to force more innovative and radical practices to emerge and to develop.

The current transition will create opportunities for younger practices, for innovation-based practices, for research-based practices to offer their contribution. And in that sense, it's an opportunity. At ecoLogicStudio, our answer to this crisis is to push more innovation into the practice and effectively show how designers can be relevant to the industry in these trying times.

5. What do you think will happen next in the design world?

We would like to see a turn towards the study of human no-human co-existence. This should include other living organisms but also intelligent digital and robotic systems that now inhabit our Urbansphere.

There is a growing sense, both in the design community and at governmental level, that technology alone is not the answer to all problems. And I think that there is a growing understanding that technology is an important tool, but that it needs to be articulated and embedded into the world we inhabit through the lenses of design at different scales and regimes.

There will be a growing recognition that the creative industry has a role to play, not only as a producer of creative content, but mostly as an instrument for the effective evolution and adoption of new technology. That is a good sign for the design world as it will most certainly expand its scope and create novel business opportunities.

Romanian Design Week 2020, an event presented by The Institute and UniCredit Bank, will take place between September 11th-20th, and this year will develop a special edition, designed to highlight the essential role of design in conceiving a better future, in a period in which creativity became more important than ever. The festival addresses CHANGE, the theme announced since the beginning of the year, updating its discourse and projects presented in accordance with the transformations and contributions brought by the creative industries during the pandemic, under the title CHANGE 2.0